How Gems are Cut 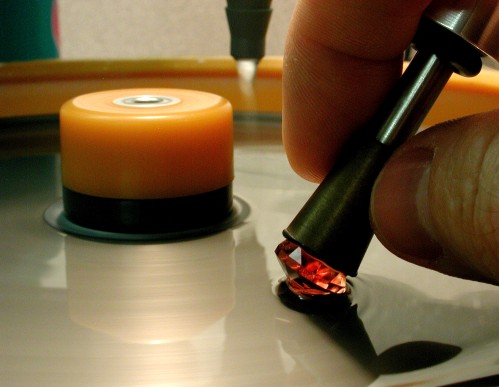 There are a number of good machines available for cutting precious stones – a process called faceting. Although the machines may look complicated, they consist primarily of a grinding plate called a lap and a set of protractors that help the faceter hold the stone accurately against the lap. The faceter controls the actual faceting process during the grinding and polishing processes on each face of the stone. 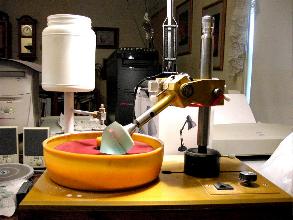 I use a Facetron machine – shown here with a very large partially cut gem in place for more cutting.

A faceted gem begins with the selection of faceting rough, which is chosen for color, clarity, type of stone, shape, and perhaps some other qualities as well.

Cutting designs are often selected to suit the piece of rough. But, in this case I selected the rough to support a specific design.

For the gem documented on this page, I selected a unique piece of rutilated quartz. I obtained this shaped and tumbled piece at a rock show and bought it because it displayed a needle surrounded by a large clear area (center of stone).

The plan for this gem is to cut it carefully around the needle, centering the needle down the middle of the finished piece. 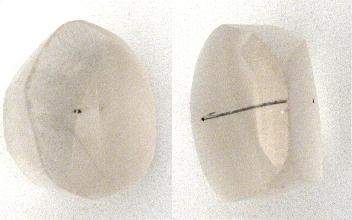 I started by grinding away much of the unwanted rough to prepare the stone for attaching to the machine. The left view is looking down the needle, the right view shows the needle from the side. Note a tiny stray needle next to the left end of the one we’re going to use.

The most challenging part of creating this novel gem design is orienting the gem rough on the dop. Orientation is critical so that the needle will wind up in the center of the finished stone where the pavilion faces will reflect it like a kaleidoscope. 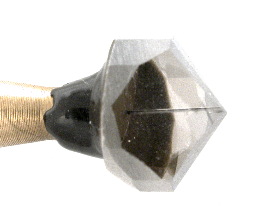 I begin by grinding a flat spot to mate with the flat end of the dop. Then, after the rough is glued to the dop, I grind some temporary faces around the circumference (girdle) of the stone and cut temporary pavilion faces at about 35 degrees. This creates a point in the very center of the pavilion so I can see how good my initial orientation was. 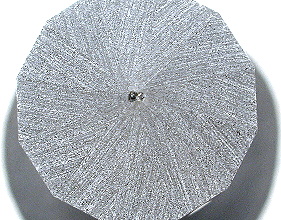 I make adjustments by warming the dop wax and gently moving the stone. After each adjustment, I recut both the girdle and the temporary pavilion faces. Then, I examine the needle’s appearance both at the point of the temporary culet and in the girdle faces. Rotating the dop between my fingers helps me to see any wobble caused by an uncentered needle.

After several adjustments the needle becomes well centered and I cut the girdle faces to their finished size. 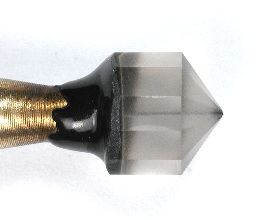 At that point, I can just cut and polish the step-style pavilion as usual. I used 42, 45, and 48 degrees for the pavilion face angles. I cut the culet faces deep enough to remove the tiny stray needle we saw earlier. Now, it is ready to transfer: 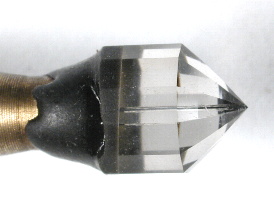 After transferring the stone, I cut the crown as usual using 46, 41 and 26 degrees for the crown angles. The next photo shows the crown prepolished and ready for the table to be cut. Notice that the needle is right in the center of the stone: 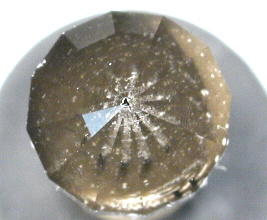 Two views of the finished stone still on the dop: 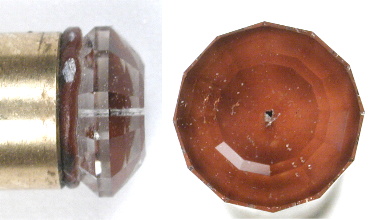 Finally, two views of the finished stone show the single needle – and the needle reflected in each face of the gem. 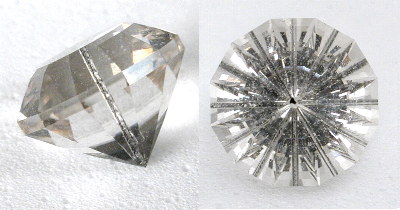 If you would like to see another, really spectacular version of this single-needle inclusion technique, check out “the sword in the stone” page.

1 Response to How Gems are Cut